Get fresh music recommendations delivered to your inbox every Friday.
We've updated our Terms of Use. You can review the changes here.

by miguel a. garcía 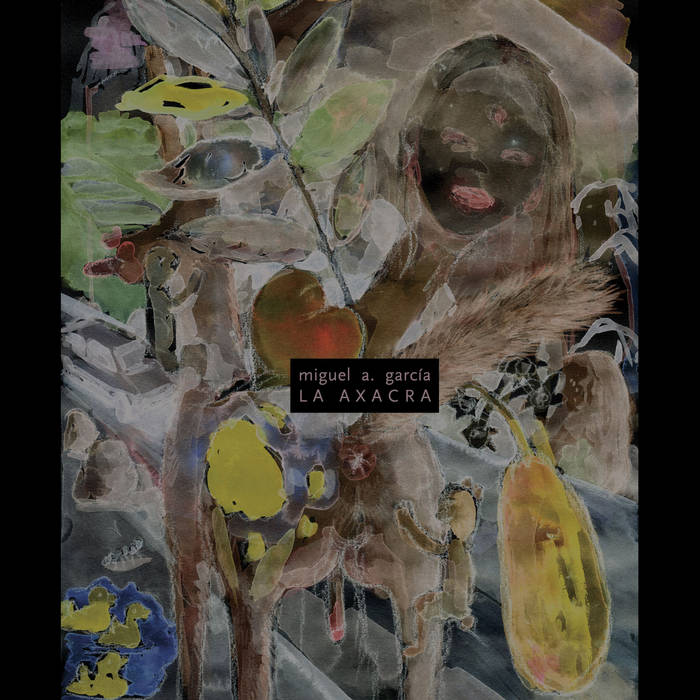 Solo album by Miguel A. García for the Bilbao based RMO label, which collects seven sustained extensive environment compositions based on electronics, field recordings and manipulations of acoustic instruments. A varied and colorful experience ranging between the intimate, the violent and the humorous, but with surprising immersive dynamic contrasts.

"Something prior to the net and the tissue is occupying a genuine position in space. Particles through which light doesn't travel. La Axacra is just invoking, persistent and wild.
Tenacious changes in the underground passage build it up undermining the planet. Occupation of the body, sand, breath and shelter.
There is a plan that trees push forward. It crashes into the rocks, exploding the motion in adverse
directions. Bat erection, ash.
The black substance is the matter of art. Occupying a place means wading into it.
La Axacra is an occupying point. A minutely sewn composition of faraway silences that weave the rhythm. Sounds-announcement. Extension and sustain. The tinkling of the botfly is the teeter-totter Miguel so much enjoys in his compositions. Essential dynamics towards the magical. Symmetric vanishing point."
(text by Elena Aitzkoa)

"La Axacra (RMO-OPEN rmomag02) is another superb piece of subdued growling noise from Miguel A García, whose work continues to find a place in my heart, perhaps doing so by burrowing into it like some unknown breed of noise-worm which gradually but painlessly consumes human flesh, gnawing away with unforeseen results. This one is full of spectacularly understated and long-form grumblers, that grind and purr away in industrial fashion like slightly unhinged domestic fridges on the fritz, or 1930s farm machinery that’s been reassembled into the form of a miniature Godzilla, poised and ready to stomp.
I’ve often used – and overused – the word “brooding” to capture something of the surliness of this grim Spanish fellow’s music, but I can’t repent my verbal limitations on this occasion. The sense of imminent violence is never far away, but in fact the set only erupts into aggressive noise for a chunk of the very long track ‘monnon’. For the rest, it’s mostly like crawling across a wasteland of broken concrete, greasy nuts and bolts, and discarded bric-a-brac. Or being dragged across such terrain by a cart. Kjetil Hansen provides “additional sound sources”, and one track has been created with materials from the “audiolab soinu mapa” – as far as I can make out, this is a collaborative web-based project which aims to compile a sound map of the Basque country (García’s home turf).
I find the continual, non-stop nature of this noise to be very effective, conducive to better concentration, and oddly soothing despite the coarse and rough textures that underpin it. Like so much of García’s music, it’s all of a piece, has a strong and well-knit integrity at its core."
( text by Ed Pinsent - The Sound Projector)

Miguel A. García (aka Xedh) is an artist living in Bilbao who works in the field of experimental music and sound art.

He has performed extensively in Europe, America and Asia, both as a solo artist and in different groups. He has collaborated with dozens of artists in studio and live, appearing in more than a hundred albums. ... more

Bandcamp Daily  your guide to the world of Bandcamp